NOTKAMOTO: A tribute to a masterpiece and symbol for decentralization, patronage, and belief in creating healthier systems for living artists to thrive in. 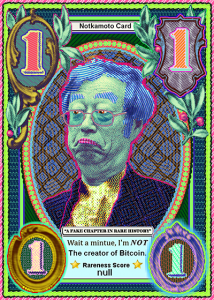 NOTKAMOTO (also known as The Notkamoto Card) is a mastercopy tribute to the original RAREPEPE Nakamoto Card, the very first NFT in the RarePepe collection, created by anonymous artist Mike in September 2016.

NOTKAMOTO is the first NFT by artist Matt Kane on the Bitcoin Blockchain and also the first in Series 8 of FakeRares. It has a supply of 300 cards, mirroring the supply of the original RAREPEPE. This is the first and only time that Kane has departed from minting unique 1/1’s to create an edition from any of his artworks.

Kane is well known for using his custom generative software to digitally paint mastercopies after original masterpieces. In NOTKAMOTO, Kane challenges what the tradition of mastercopies can be, intentionally skewing away from being absolutely faithful to the image. “The most compelling brushstrokes to consider emulating in this new paradigm has less to do with image, more to do with honoring the culture, memes, exhibition history, provenance, market, technology, and general context that surround a masterpiece NFT.“

NOTKAMOTO: A tribute to a masterpiece and symbol for decentralization, patronage, and belief in creating healthier systems for living artists to thrive in. #cryptoart
Please watch this introduction to my artwork and reflect: https://t.co/tzxXq5ZEzq